I could share the normal platitudes about Christmas being a “time for sharing” and “family”, but everyone does that.  I could go the other route and remind you that Christmas is a celebration of the Advent and Christmas.  I could.  But why bother really?  Either you are a Christian who believes that and nothing that I say could convince you otherwise (not that I would try) or you’re not and nothing that I say here will change your mind so let’s take that as a given; Christmas is a time of year that Christians celebrate the birth of Christ with family (My definition, if you don’t like it get your own).  My story is more about understanding why Christmas is special to me.  It’s not those reasons, not really, but they’re closely intertwined.

I’ve mentioned elsewhere here that I grew up poor in a rural and generally poor community.  We didn’t know that we were poor.  I mean, I guess someone knew it but he wasn’t sharing with us kids.  There were things that we wanted that we couldn’t have but our parents always did a great job of making sure that we had what we needed.   There seemed to always be money for the occasional coke (of any flavor… even pepsi (it’s a southern thing)) or a couple of bucks for a new toy on our birthdays.  We didn’t get to go to the mall but there was a Christmas parade in town that was (after the parish fair of course) the event of the year.

The Christmas Parade had horses and floats and brand new tractors from the farm supply store.  There were Shriners on those little Go Carts who would do donuts and figure eights and all kinds of crazy stunts just inches from the kids lining the street.  There were the folks from over at the VFW who would walk among the crowd and pass out little flags for you to wave whether you gave them money or not and there was the usual array of small town floats made out of some farmers utility trailer and still smelling a bit like the manure that he had hauled with it the week 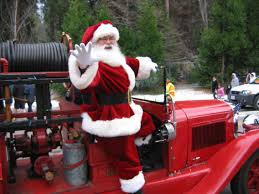 before.  There was “the most beautiful woman in the world” which was usually the local rodeo queen riding in a convertible loaned out by the local Ford dealership.  There were people you knew and had known for your entire life but you couldn’t play with them.  The parade was about getting out and meeting people so a wave, a hand shake or two and it was on to see who else you knew.  They even had Santa Clause stop by every year for a ride on the fire engine and who wouldn’t?  *I* certainly would have driven in from the north pole for a chance to ride on that big shiny truck with all of the lights flashing… still would.

The mall?  The mall was 58 miles away and kinda bare even then. Phhttt… rich kids.

People from that area didn’t collect toys for the poor because, well, you might be on the list to get one! Being poor wasn’t something that happened to other people, it was a fact of life.  We were all poor and it didn’t fundamentally change our lives except that we learned not to want things that we couldn’t have.  Oh, don’t get me wrong, we collected toys for the orphans over at Saint Michaels (I learned at an early age that Catholics have more orphans than anyone) but we were Baptist so, no orphans.  If you were going through a particularly rough time you might find a Hefty sack of “gently used” clothing on your porch one afternoon after church but no one would show up with a newspaper crew to give your kids Christmas presents.  Our charity was subtle, quiet, respectful.

On Christmas Eve, just before bed time, Mom would let us open one gift each.  That gift was ALWAYS a set of pajama’s that we’d immediately change into and then be sent to bed.  No matter how hard we tried to pick a different gift she always managed to work it so that we ended up with those PJ’s to sleep in on Christmas night.  As we got older and caught on she resorted to putting them in large oddly sized boxes that just HAD to be an awesome gift.

When we went to sleep on Christmas Eve there were no visions of sugar plums dancing in our heads because… well… what the hell is a sugar plum anyway?  Rich kids in the city might get sugar plums but by the time that Santa passed by our community the preserved fruit pickings were pretty slim.  We had dried figs once, the year mom won a food dehydrator from somewhere… that’s about as close as we ever got.

Chestnuts over an open fire?  Nope.  Nary a one.  We didn’t even HAVE an open fire.  We had a gas heater because that was cheaper,

(even in the 70’s) than firewood. It was a big wall mounted heater that was set in such a way as to heat rooms on both sides of the wall.  Ours was between the kitchen and the living room.  To save money we didn’t run the heat at night so mom or dad would light it first thing in the morning before we were rousted out of bed.  It was always a race to see who could get a premium spot next to the heater for getting dressed on really cold mornings.  You’d hear the “splat, splat, splat” of little bare feet on hardwood floors followed by teeth chattering as we got as close as we could to the warmth.   You’d stand there mostly naked and put your clothes on, socks first, as fast as you safely could. The heater would leave little squares branded on your ass for the rest of your life if you bent over in the wrong way to get your socks on.  Which reminds me, personal quirk:  I ALWAYS put my socks on first when getting dressed.  I think this explains why.

When we put up our Christmas tree mom and dad would take us on a drive through the woods.  We’d look for the bright green patches through the leafless hardwoods that would indicate a small

stand of eastern red cedar trees.  Each time one was spotted we’d stop, and everyone would trek through the woods to check them out until you found the perfect tree.  It had to be full with no bare spots and just the right height.  When I got older we were sent into the woods behind the house with a handsaw to get a tree.  My brother and I could spend all day walking those woods looking for a perfect tree. There were no “purchased” trees that I knew about back then and anyone that had an artificial tree was just a little odd. (still are if you ask me).

care of for years.  I still remember the Christmas’s that I got the “big” gifts.  My first BB gun, my first bicycle, my first shotgun.  All were cherished and maintained carefully.  We didn’t get big gifts on our birthdays, only Christmas, and we certainly didn’t get more than a few gifts. All of our gifts were wrapped with exceptional care and attention.  They were individual works of art created with love and paper recycled from previous years.  Mom would hand make the bows out of scraps of ribbon from her sewing kit.  I try to spend the same effort wrapping presents today but I’m nowhere near as good as she was.

Mom would always cook Christmas dinner for us.  We didn’t have a lot but we had standard holiday fare.  Turkey, shot by dad.  Beans, carrots, squash, greens

(mustard and turnip) and corn all grown by dad.  Cornbread ground from corn that we had grown and Yams made from sweet potato’s from the garden.  Chocolate pie, butter pie (actually cheese cake) and, of course, mom’s banana pudding.    The banana pudding was homemade, from scratch, with real ingredients.  When my nephew was out here for Thanksgiving I taught him to make it as well.  At one point he looked over and said, “Nanny taught you to make pudding and now you’re teaching me. That’s almost like Nanny teaching me.”  I had to leave the room.

We went to church every Sunday.  We went to church a few extra times around Christmas for the Christmas cantata and other events but there wasn’t a lot of difference.  We celebrated Christ’s life and the gifts that He granted us through His death all through the year.  On Christmas we celebrated His birth.  It’s hard to explain to folks but there wasn’t a lot more “Jesus” in the world around Christmas, at least not for us.  We were celebrating a single day in His life the same way that we celebrate every other day that He walked among us.  The same as we celebrate His death and 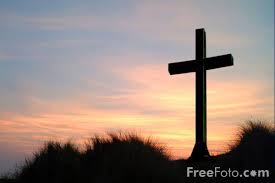 His resurrection. No one had to remind us that “Jesus is the reason for the season” because we never forgot. Ever. Not on Christmas and not on any other day of the year.

Christmas isn’t a biblical Holy day but most Christians seem to have forgotten this.  They ask, “What are you doing to remember Christ during Christmas?” which is an ( probably unintentional ) insult.  Why would I need to do more to celebrate Christ just because it’s his birthday?  The answer, “Nothing more than I would do to remember you on your birthday,” doesn’t always make people smile but it’s true.  Maybe they should study up the other 364 days out of the year?

So that’s Christmas to me.  Memories.  Faith. Family. Community. Santa Claus. Gifts. Food.  All wrapped into one joyous celebration for the birth of our Savior.  Some would call it less than enough focus on Christ.  Those people need to pray on it and get over being jealous of my very full heart.

Others would call it forcing Christ into others lives as part of what has become a corporate holiday.  They can play at hypocrisy and adoption of a traditional Christian holiday (not Holy Day) if they want but like the Christians that I find wanting, they won’t have much luck ruining the holiday for me and mine.   Maybe they should pray on it as well?  Mayhap Buddha has an answer for them… somewhere…

For me?  I’ll spend the day with family.  Presents with my wife at daylight followed by Brunch with my nieces and then hooking up with the Hines for a day of enjoying my community of friends.  It is enough.  it is more than enough.

For the folks that read this blog.  Please, have very Merry Christmas.

P.S If your mom is around on this Christmas holiday take the time to give her a special and heartfelt hug.   You’ll wish you had more of those one day.  I promise.

Please feel free to comment. I love hearing from you! Cancel reply